Commemorating the 75th Anniversary of D-Day

The Normandy landings (Operation Neptune; D-Day) were a landing operation by the Allies during World War II on Tuesday, June 6, 1944, which launched Operation Overlord (the invasion of the German-occupied western Europe). The landings were an international effort primarily consisting of American, British and Canadian troops, but also including troops from Australia, Belgium, Czechoslovakia, Luxembourg, France, Greece, New Zealand, Norway, and Poland. 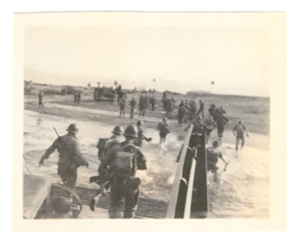 The landings required detailed planning, which the Allies began in 1943, and involved five beaches along a 50-mile stretch of France’s Normandy region. They made requirements for the phase of the moon (enough light for the gliders and paratroopers to land), tides (to expose the German beach fortifications), and time of day, making the window for invasion incredibly limited. A deception campaign, Operation Bodyguard, was also created in an attempt to mislead the Germans and draw them away from Normandy.

To this day Operation Neptune remains the largest seaborne invasion in history. Over 5,000 naval vessels escorted over 160,000 troops while also providing artillery support.1 Support was also provided in over 17,000 paratroopers and glider infantry.2 D-Day allied casualties are estimated at 10,000.

The operation was originally scheduled for June 5, but had to be delayed 24 hours due to bad weather. “The air wasn’t too good” says Bert Chandler, recalling his boat ride to Normandy during his Veteran’s History Project Interview. Chandler served in the U.S. Army’s 1st Infantry Division and was part of the first wave to storm Omaha Beach. “The seas were very rough; most of the guys were seasick.”

One of the most common questions about D-Day, and one shrouded in some misunderstanding, is what the D of D-Day actually means. While many believe it means “designation day”, “decision day”, “doomsday”, or “death day”, its true origins were a bit less prophetic. It’s military etymology is simply from a code designation used for the day of any important military event and simply means Day. For example: the Army will attack at this hour (H-Hour) on this day (D-Day). Accordingly, four days prior to the event is D-4, and 4 days after the event is D+4. Consequently, there were many D-Days during World War II, though, perhaps none quite so infamous as June 6, 1944.

The beaches: who, where and why 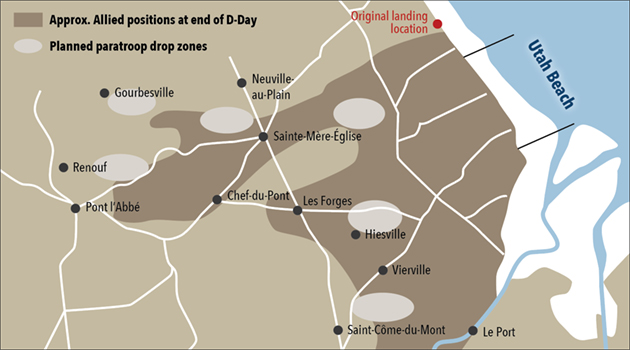 Who: The westernmost beach of the Normandy Invasion was tasked to the U.S. 4th Infantry Division supported by the 82nd and 101st airborne divisions.

Objective: Utah beach was added to the plan in order to secure a beachhead on the Cotentin Peninsula and capture the port of Cherbourg.

Interesting Facts: In a rather serendipitous weather interference, the boats were pushed by strong currents about 2,000 yards from the intended landing zone and into a less fortified area. Realizing the error, Brigadier General Theodore Roosevelt, Jr. stated “We’ll start the war from here!”

Result: After starting in confusion, the Utah landing ended in success, though they were not able to achieve all of their objectives. The allies were able to land 20,000 troops, had fewer than 300 casualties, and were able to penetrate 6 miles inland. 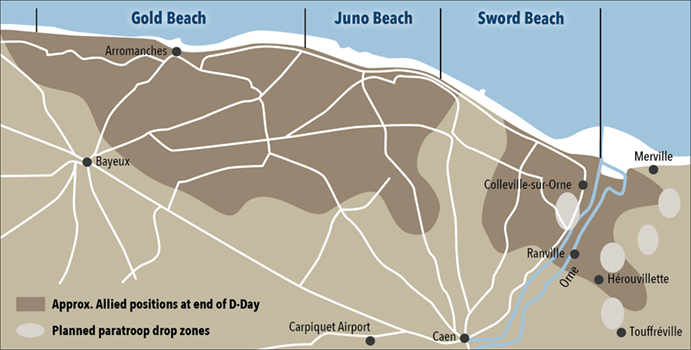 Who: Gold beach was tasked to the units of the British 50th Infantry Division.

Objective: Their goal was to seize the port of Arromanches, cut off the Caen-Bayeux highway, and make contact with Americans from Omaha on the right and Canadians from Juno on the left.

Interesting Facts: The British were aided by the use of “Funnies”. These were unusually modified tanks, designed in light of the experiences of the failed Dieppe Raid to overcome similar issues for the Invasion of Normandy. There were many different designs such as the “Bobbin”, which formed a path across the beach by laying reinforced canvas, and the “Crab”, which had a rotating cylinder of weighted chains and was used to explode mines in the tank’s path.

Result: The British were able to land 25,000 men and had an estimated 400 casualties. They penetrated 6 miles inland and were able to take Arromanches and meet up with the Canadians from Juno Beach, but were not able to cut off the Caen-Bayeux highway or link with the Americans.

Who: The easternmost beach of the Normandy Invasion was tasked to units of the British 3rd Division with French and British commandos attached. They were supported by 6th Airborne Division.

Objective: They were attempting to take the hub city of Caen, an important crossroads for transportation, and link with the Airborne forces at the bridges over the Orne waterways.

Interesting Facts: Most of the fighting was done inland rather than on the beach and the British were initially met with relatively moderate fire in a lightly fortified area. However, the Germans regrouped and mounted the “only serious German counterattack of D-Day”, which was eventually stopped before they could reach the Channel.

Who: The Canadian 3rd Infantry Division.

Objective: To cut the Caen-Bayeux road, seize the Carpiquet airport and link with the British on Gold and Sword beaches.

Interesting Facts: The first assault landing was delayed, submerging the beach obstacles and resulting in heavy damage to the landing craft, of which 30% were damaged or destroyed. The first wave of troops to reach the beach also took heavy fire and the chance of becoming a casualty in the first hour was 1 in 2. Progress inland was good, however, and one troop of the 1st Hussar tank regiment reached the Caen-Bayeux road, making them the only unit of the entire Allied invasion to reach their final objective on D-Day. They were later forced to withdraw when they were not backed by reinforcements.

Result: The Canadians landed 21,400 troops and suffered 1,200 casualties. They were also able to reach the British on Gold beach but were unable to reach those on Sword, cut the Caen-Bayeux road or take the Carpiquet airport.

Bert Chandler graduated high school in 1940 and, with five of his friends, went to enlist. Only “two of us passed the physical, so we decided not to, but when I got home I had a letter in the mail that I was called up. So it didn’t make much difference” recalls Chandler. He attended Basic training at Camp McClellan in Alabama as part of the 300th Infantry Division. Chandler was told in Winter of 1943 that he was going overseas, but while the rest of his regiment went to the Pacific, he and a two others were held back and eventually sent to Europe. The 300th was disbanded and he joined the 1st Infantry Division.

“I was proud to be in it” says Chandler of the 1st. The 1st Infantry Division, nicknamed the “Fighting First”, is the oldest continuously serving division in the Regular Army. “Somebody said the 1st division was the army and the rest of the army were replacements” jokes Chandler. Omaha Beach, the largest and most heavily defended of the assault areas, was assigned to the U.S. 1st Infantry and 29th Infantry Divisions.

The Omaha landing had ambitious objectives: to capture three villages (Vierville, Saint-Laurent, and Colleville), cut the Bayeux-Isigny road, attack south toward Pointe du Hoc, and link up with the British at Gold Beach. The water was incredibly choppy, dragging the landing craft around and sinking 27 (of 32) amphibious swimming tanks (DD; “Donald Duck” tanks). The troops landed in confusion and the Germans were ready, shooting from the cliffs that surrounded the beach.

“We were immediately under fire as soon as we got within rifle range of the beach. Mortars, everything they had to throw at us. How anybody ever made it…” When asked how he made it, Chandler responded “very carefully I guess. I zigzagged a lot. I can remember looking at the water and it was like it was raining…and it was bullets hitting the water. Just horrible.”

“They left us out at chest-high water, so you didn’t have much mobility, really” says Chandler. “There were 189 men in our company and about three hours after we hit the beach, we had 69 men left.” When he got to the beach “there was probably 100 yards to the first cliff…it was probably the only protection there. It was just confusing. Everybody was trying to get their heads up and nobody wanted to. There were a lot of men, lot of wounded, screaming and hollering. I don’t know… terrible.”

Eventually, with the help of Navy destroyers blasting German fortifications at point-blank range, they were able to scale the cliffs. Only 600 had reached higher ground by mid-morning. However, by the end of the day, the Americans had a solid toe-hold, though it wasn’t until D+3 that they were able to accomplish their objectives. The 1st and 29th Divisions suffered 2,400 casualties and were able to land 34,000 troops.

D-Day is regarded as one of the greatest military achievements ever–an enormous campaign that changed the tide of the war. The Soviet Union had been begging the Allies to open a second front, in order to lessen the pressure on them (the Germans had killed tens of millions of civilians and soldiers in the Soviet Union) and Operation Overlord was planned to do just that. It worked. The Germans did not have the resources to fight in both places and they began to retreat. By August, Paris had been liberated. By March 1945, U.S. troops marched into Germany. On May 7, World War II was over.

Without the sacrifice of the 10,000 allied casualties 75 years ago, the Soviet Union would most likely have fallen, and the war would have concluded very differently. While the tides and bad weather were against the Allies on June 6, their perseverance and bravery changed the entire course of the war. For that, the free world owes an enormous debt of gratitude to these men.

As many of you know, our annual Warbird Roundup will be held August 24 & 25, 2019. This year we will be commemorating the 75th Anniversary of D-Day with some very special visiting planes & guest speakers. Join us in celebration and gratitude at this wonderful event.

In honor of the 75th Anniversary this week, our amazing Curator has put together a D-Day display. There’s so much history here, come experience, discover and remember!