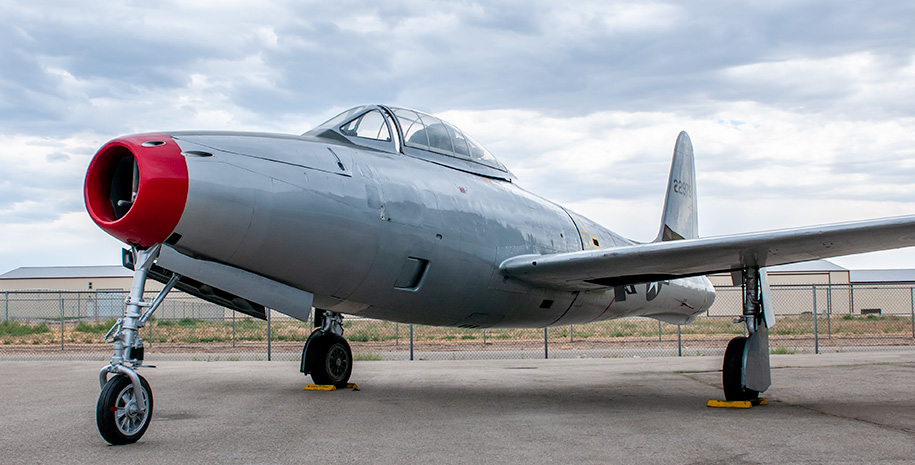 The Warhawk Air Museum’s newest aviation addition is the F-84G Thunderjet. “An acquaintance of mine back in Maine gave me a call and wanted to know if we wanted to have an F-84” says John Paul, co-founder of the museum. It arrived in pieces on June 24, having traveled from a park in Sweden, to Maine for restoration, and finally, to its new home here in Nampa.

“This particular airplane is a straight-wing jet fighter, one of the first ones” says Paul. Indeed, the Thunderjet, along with the Lockheed F-80/P-80 Shooting Star, the Grumman F9F Panther, and the McDonnell F2H Banshee were contemporaries as America’s first generation of jet fighters.

The history of the Thunderjet variants

The F-84 Thunderjet has a long, storied past, which began in October 1944 when Republic Aviation abandoned the idea of a jet engine in the P-47 Thunderbolt and set to work designing a single-engine, straight-wing jet fighter for the U.S. Army. After presenting an impressively clean and sleek design, three XP-84 prototypes were ordered in November 1944 and delivered from their plant in Farmingdale, New York in December 1945. In 1946, these prototypes took to the air for testing, and immediately showed promise, breaking the national speed record at 611 mph. However, despite the promising results, the XP-84 showed stability deficiencies and had an overweight airframe.

A progression of F-84 models followed the prototypes, beginning with the P-84B in 1947 (the first production version), each of which had their own problems.

The now-designated F-84B had to limit maximum speed and acceleration due to the fuselage skin wrinkling at high speeds. It was also plagued with part shortages and difficult maintenance, earning the nickname of “Mechanic’s Nightmare” and was grounded in May 1948.

The F-84C had a more reliable engine and improved electrical system but the same issues as the B and was also withdrawn. By the end of 1952, all of the Bs and Cs had been retired from service.

It was the F-84D that saved the entire program from cancellation by addressing some of the main concerns of the B and C and proving superior in most performance categories to the Lockheed F-80. It was the first version that was truly operational and ready for combat with a strengthened airframe and thicker aluminum skin. 154 were completed and delivered by April 1949 before being replaced by the E variant. The last of the F-84Ds were phased out by mid-1957.

The F-84E proved a huge improvement over the D and was optimized as a fighter-bomber as it was now understood that straight-wing jets could not compete in air-to-air combat with swept-wing fighters. The many improvements included a new engine, more wing reinforcement, a longer fuselage, increased fuel capacity, and an increased maximum range. The Thunderjet became the best fighter-bomber aircraft in the Air Force inventory. The F-84E was included in the inventory of the Air Force Reserve (1954–1957) and the Air National Guard (1951–1959).

The F-84G, the newest member of the Warhawk Air Museum, was the definitive version of the straight-wing Thunderjet series. While very similar to the E, it was considerably improved in its performance capabilities. The F-84G became the first production fighter-bomber equipped with single-point in-flight refueling capabilities and the ability to deliver an atomic weapon. These planes, with the increase in range that refueling afforded, confirmed the importance of the ability to deploy fighters quickly and to any point on the globe when they were needed. Both of these developments were also extremely important in the development of military aviation and are precursors to the significant capabilities of today’s fighters.

“I wanted to get early Korean War Jets here” explains Paul when asked about the F-84’s place at the museum. “It’s a static display airplane” he says, and “we’re going to have to make a lot of small tune-ups on it, but it’s going to be a nice looking airplane when we get done with it. They’re pretty rare really.”

The F-84G Thunderjet was also one of the first jets flown by flight demonstration teams in the U.S. Air Force including the “Skyblazers” and the famous “Thunderbirds”. “We’ve kind of decided to paint it up in the Air Force Thunderbird paint job” says Paul. “It’s really spectacular. It’ll be pretty saucy when we get done with it.”

The plane won’t be ready for display for several months yet, watch for updates on our Facebook page.