Thomas R. Young was born September 24, 1922 in Tennessee into a loving family of modest means. Despite the Great Depression shaping his formative years, Tom thrived, training as an artist and earning enrollment at Memphis State University. By the time he arrived at college, however, war had come to Europe and Asia. His classmates began to sign up for service and Tom himself turned a keen eye to the sharp new uniforms and shiny awards being sported by some of his peers.

When the Japanese attacked Pearl Harbor on December 7, 1941, he knew it was time to act. The next day he and his classmates were brought into the campus theatre to watch President Roosevelt ask Congress for a declaration of war. Many of his friends insisted that they all march down to the recruiting office and sign up right then en masse! Tom took a more measured approach. He suggested they instead try to fill roles where they were needed. Himself having a keen interest in flying, Tom applied for the Army Air Force.

His application was accepted and he passed all his tests with ease. He married his college sweetheart and was whisked off to training. The first year and a half of his service involved being sent all over the United States, where he learned to march, shoot, fly, navigate, and eventually, lead a bomber crew as its pilot. Tom and his crew excelled, consistently ranking among the best in their training group. After countless hours of training, he and his crew were ordered to fly their B-17 bomber to Europe.

A long flight over the Atlantic to Italy (by way of North Africa) culminated in Tom and his crew linking up with the 774th Bomb Squadron, 463rd Bomb Group flying out of Foggia, Italy. Within five missions, they were the lead plane in the formation.

Theirs was an anxious existence; every other mission saw bombers and their crews lost to German anti-aircraft fire. They nonetheless flew 18 missions, successfully bombing rail yards, bridges, supply depots, and munitions factories across Yugoslavia and Southern Germany. Their 19th mission, however, was to be a step too far.

The target was Munich, the most heavily defended city in Southern Germany. Tom’s plane was the lead plane in the formation, with the commander of the squadron to occupy the co-pilot’s seat. All was quiet and anxious as the formation slipped across the Alps in the early hours of November 16, 1944. Suddenly, some chatter came on the radio. A recall order? Were they being ordered to break off the attack? A debate broke out and Tom’s co-piloting commander ordered his squadron to return to Foggia.

But wait! It soon became apparent that the recall order was misheard. It was just accidental cross communication to a small training aircraft flying in the area. Tom and his squadron turned around again to rejoin the attack, but by now they were trailing the formation and exposed. This was no way to attack Munich, but perhaps they could attack another target. Tom’s commander decided on the important city of Innsbruck, Austria. 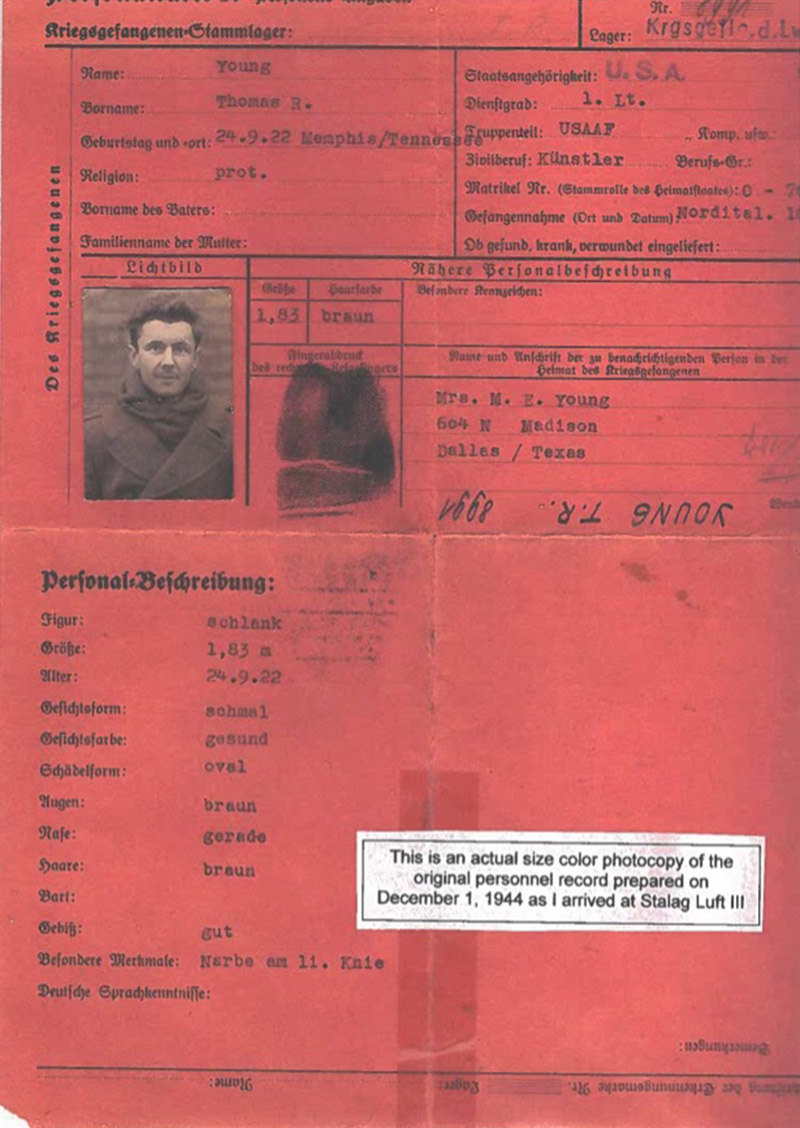 The handful of planes appeared above Innsbruck and went about their grim work, seeding the industrial city with explosions and destruction when suddenly, “BANG!” Tom’s bomber shook with the impact of enemy flak. He looked to his right and saw both engines in flames as the plane began to spiral uncontrollably. His engineer was able to climb over his stunned co-pilot and cut their fuel, killing the flames, but Tom was still wrestling with an uncontrollable aircraft. Straining, he pointed the crippled bomber towards Italy, as alpine peaks began to climb around them.

As if by a miracle, Tom was able to guide the stricken aircraft out of the mountains and over Northern Italy, but they would not make it much further. They began bailing out of the aircraft as Tom struggled to keep it in the sky. Tom himself was the last man out, bailing with less than 2,000 feet separating his airplane from an unpleasant reunion with the ground.

Most of his crew was lucky; they were picked up by Italian and Yugoslavian partisan groups with whom they would fight the remainder of the war. His commander was actually whisked back to the United States within two months. Sadly Tom, and two of his more badly hurt crewmen, were captured. They were stripped of their possessions and interrogated, before being shipped to Germany for internment in the infamous Stalag Luft III prison camp. 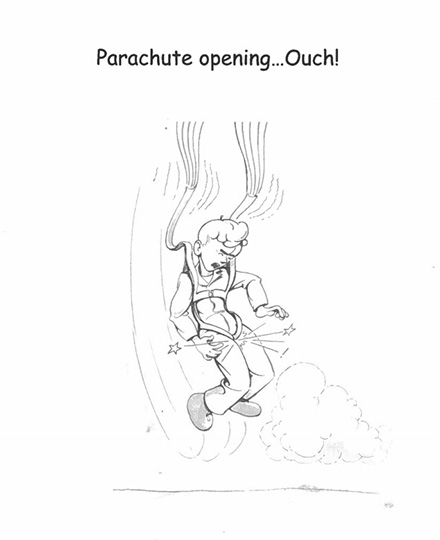 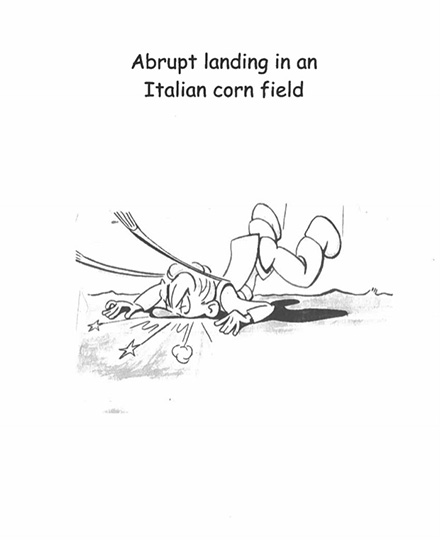 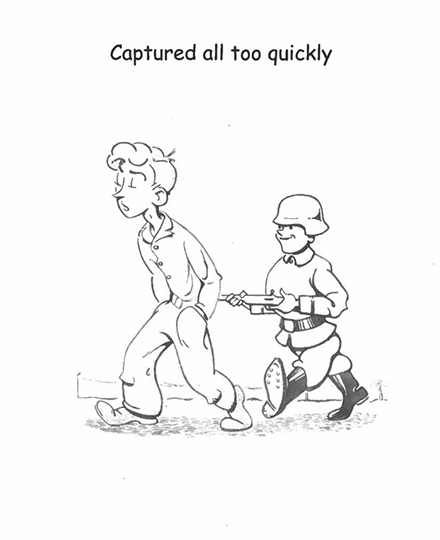 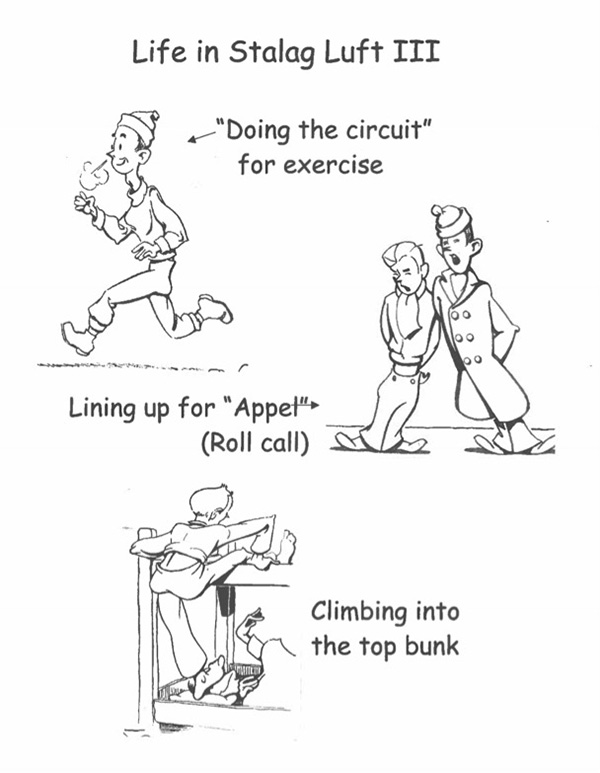 Life in the camp, however, was not so bad. The Germans treated western prisoners, particularly officers, rather well (albeit with some very notable exceptions). Tom quickly made friends with his new companions and was soon a celebrated figure in the camp. His artistic talents, put on the back burner during wartime, were allowed to flourish in the austere environment. He was given a diary and some pens by another prisoner and began drawing caricatures of his fellows, himself, and their situation. A spot in the camp newspaper (really more of a bulletin for events) was left for Tom to illustrate as he saw fit. Through art, he kept up not only his spirits, but those of his fellow internees. Several examples of Tom’s artwork are shown here.

As the war in Europe drew to a close, the prisoners were moved to another camp to the south and before long, were liberated. They were flown back to France, where they were fed, clothed, and treated to celebrations. When Tom was finally returned to the United States, his family was expecting an emaciated husk, but were greeted instead by a man who looked healthier than the one that had left!

Before Tom could be reassigned to finish the war in Asia, the Japanese surrendered. He was given a handshake and his discharge papers on September 25, 1945. The day after he turned 23 years old. A spell as an instructor during the Korean War loomed, but fortunately his deployment days were over.

He would settle down with the woman he had seen so little of since the start of their marriage, have children, and eventually become a successful animator and a partner in an animation studio. Nearly 60 years later, long after retiring and moving to Idaho to be closer to his children, Tom was asked about being shot down and captured over Axis territory. He replied, “It’s the pride of my life – all 10 men on that plane survived the war.”

I am now living at The Terraces, a senior community in east Boise. We have a couple of other gentlemen living here who also flew B-17s over Germany and the 102 year old widow of another bomber pilot. We also have a couple of P51 pilots who few combat missions. We are so blessed by their service to our great country!
Thank you so much for sending this.

Where are you from?
Originally from Wyoming, now Boise
0
« Previous 1 2 3