Answering the call to duty

Donald “Bud” Warren Tolmie was born on July 5th, 1921 in Blackfoot, Idaho. His father owned several farms across Southern Idaho and was often gone on business, so Don grew up accustomed to hard work. From a young age, he spent days carrying crates of produce and driving trucks. By the early 1940s, he had secured for himself a spot at the University of Idaho and looked poised for a respectable life as an Idaho businessman and farmer. The Empire of Japan would have something to say about that, however. On December 7th, 1941, the United States policy of keeping the warring world at arms-length abruptly ended when the Imperial Japanese Navy launched a shocking surprise attack on the naval base at Pearl Harbor. 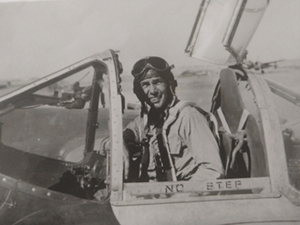 Don Tolmie was caught in a painful predicament. His country called, but the life he had carved for himself at college was a good deal more comfortable than the one he had on the farm. But Don Tolmie was no coward. He would serve his country in its hour of need. Don finished that year of school, and in June 1942 he secured the blessing of his sweetheart, Irene, and headed down to Boise to sign up for the US Army Air Force.

He completed his initial cadet training at Gowen Field, just outside of Boise, but the call to action was widely answered and the Army had more prospective pilots than it had places for them. It would be February of 1943 before Don was shipped to Santa Ana, California for his pre-flight training. A life on the farm had given Don a strong body and a quick mind, and pre-flight training gave way to flight training in Chico, California. Success there saw Don travel to Williams Field in Arizona to take up the mantle of a 2-engine fighter pilot.

… Honey you don’t know how much I love you and miss you and each time I get a letter it does something to me, I love you so much I can’t begin to tell you how much it is. 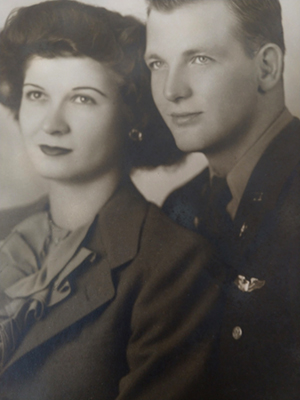 Two years to the day that war had come to the United States on the wings of the Japanese Navy, Don was given his own wings and a week’s leave. He used the time to rush back to Parma, ID and marry Irene before reporting to his new station. His station changed frequently in those days and brief spells in Santa Rosa, Concord, and finally Santa Maria followed as he mastered his Lockheed P-38.

But the time had come to deploy and his squadron was sent by train to the East Coast and put on a ship to Europe. Sailing at 10 knots was agonizing for men used to sprinting around the skies, but their ship eventually docked in Algiers. From there, they flew to Bari, Italy where he was assigned to the 82nd fighter group in late April 1944. The accommodations were crude, and the landing strip as much an object of imagination as fact, but Don wasn’t bothered.

How are you tonite Honey? I have hopes of finding you well settled there in your apartment. I certainly hope you have taken to it. I feel certain that you would find more contentment and better able to find things to do with your time. I’m afraid that Dad of mine will have you spoiled pretty bad by the time I get home. I wouldn’t care though. As I couldn’t love you any more, spoiled or unspoiled.

… Darling I’m tired again tonite. I suppose you think this is odd but I got up again at 4am and that makes a long day. I think of you constantly all thru the day and nite. No matter what I’m doing or where I am and the day I can come home. It’s going to be second only to Dec 12. There never will be a time as beautiful as that day and tomorrow makes 7 months. Will close now my love. Goodnite Honey.
Your Bud.

The next few months were harrowing. Don watched many of his comrades fall victim to the precise Axis anti-aircraft fire as they flew again and again deep into hostile airspace to bomb key enemy infrastructure. Don himself amassed an impressive catalogue of near-misses; everything from hostile ground fire to sudden engine failures. Enemy aircraft were rare, however. By mid-1944 the Axis had lost the ability to contest the skies over Southern Europe. 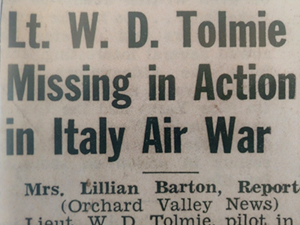 This trend towards Allied air superiority would mean little to Don. During an uneventful flight over Northern Italy, Don was annoyed to find that the tail of his airplane had been suddenly and unceremoniously removed. A German Me-109 had come out of the clouds to his flank and disappeared again before anyone could react. Don had no choice but to bail out. He leapt from his stricken fighter at about 21,000 feet and sailed smoothly down to a less-than-comfortable landing. He stood up, bruised but alive…only to realize he had landed just outside a German command post. The next telegram his wife Irene received read:

The Secretary of War desires me to express his deep regret that your husband Second Lieutenant Donald W Tolmie has been reported missing in action since twenty-two June over Italy. If further details or other information are received you will be promptly notified.

Don had been captured and, while not mistreated, was interrogated by the Germans until “They decided I wasn’t very smart or didn’t know anything anyhow.” He was then packed into a train and shipped north to the infamous prison of the German Air Force, Stalag Luft III.

It was a bleak time for Don Tolmie. He remembers being cold and bored. He was hungry. Some of the men he was interred with snapped under the strain and would try to sprint out the gates when deliveries arrived. The crack of the guards’ rifles signaled the end of an escapee’s bid for freedom. However, in the midst of such darkness, on October 6th, he received a glimmer of hope in the form of a letter from the Red Cross. It read:

We should be most grateful if you would kindly transmit to
2nd. Lt. Donald W. Tolmie
POW. Nr. 10123
the following message received by cable Sept 28th. from the American Red Cross.

As the Russian Army closed in, the Germans evacuated. Don and the rest of the prisoners marched through the German winter between a series of trains which would put them in the far south of Germany, at Moosberg. There he stayed until the camp was liberated by the US Third Army in April 1945. These men were liberators, but they were not logisticians—they still had a front line to push. Don and a fellow prisoner took their newfound freedom as an opportunity to go explore the surrounding countryside. While they were gone, the freed prisoners were formally indexed and organized for shipment back to France. This left Don in the awkward situation of being an AWOL (former) prisoner of war!

Eventually, all was made well and Don was sent to France to recover and then back to the United States. There he was given leave and allowed to return to Parma to see his daughter for the first time. As the war came to a close, Don Tolmie was released from active service. Ever the patriot, he filled out paperwork to enroll in the Reserves. Irene, having already lost her husband once, ensured the paperwork never made it to its destination. And Don, well he knew better than to question her. 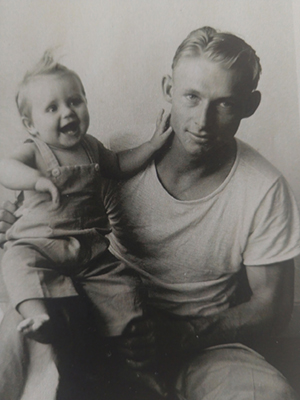 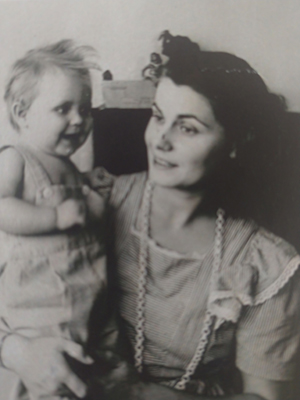 These stories are very interesting, especially in relation to the sacrifices we are being currently asked to make. Keep them coming.

Where are you from?
BOISE
2
Mick Warden

We must never forget the lessons learned from WWII. The future of our country depends upon the teaching of history’s lessons to our youth.

Where are you from?
Weiser, ID
2
Donald Schott

I do not have the words to express the admiration and gratitude that I have for these veterans!

Where are you from?
Boise
2
John Reid

I have read dozens of books and hundreds of stories of our brave WWII heroes and never get tired of reading them….this was another good one!

Where are you from?
Idaho City
2