Celebrating Carmelita Pope and the Women of the Warhawk 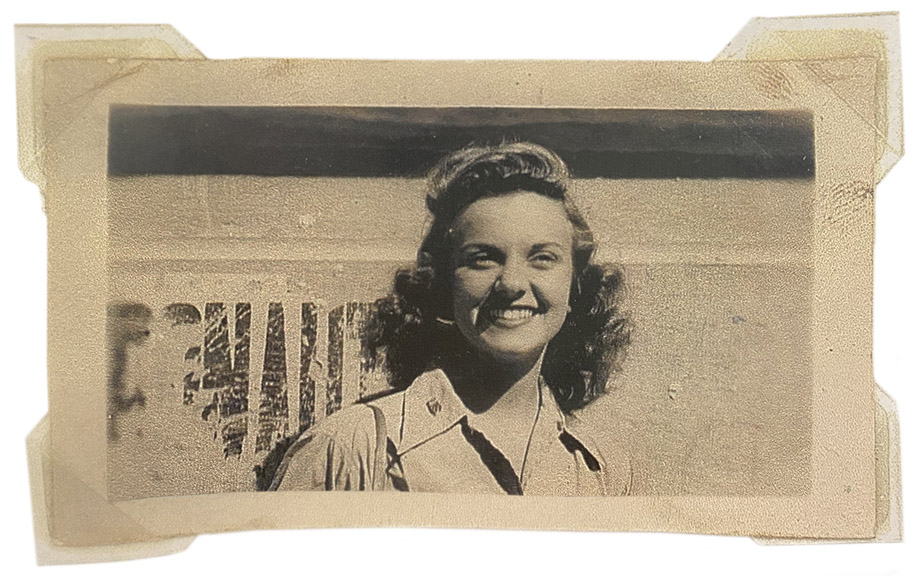 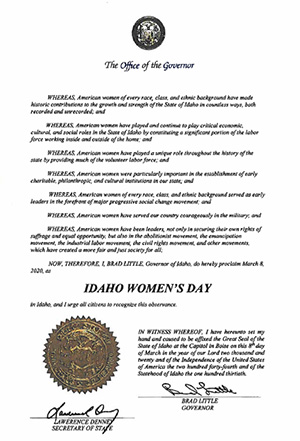 As some will know, March 8 is International Women’s Day. Celebrated since the early 1900’s, it’s a day to commemorate “the social, economic, cultural and political achievements of women.”1

New in 2020, however, is a proclamation by Governor of Idaho, Brad Little. In observance of the “historic contributions to the growth and strength of the State of Idaho”, “critical economic, cultural and social roles” and the courageous military service of and by American women, March 8 has also been declared Idaho Women’s Day.

At the museum, we will be observing the occasion and celebrating women by honoring the women of the Warhawk through their stories, accomplishments and uniforms (read till the end!).

Carmelita Pope (born April 15, 1924) was destined for the stage from the beginning. Her father, Nicholas Papa, performed Vaudeville while putting himself through Law school. He eventually gave up entertaining for the more lucrative and steady world of Law, “but he decided that if he ever had any children, they were absolutely going to go into the theater”. And so Pope’s career began at age five, in Chicago, with drama, singing, dance and music lessons–it was the drama that stuck. “I gave up dancing at a very early age, and singing was never quite my career, but the acting was wonderful. I loved it.”

Pope studied in Iowa at the Goodman School of Drama and Marycrest College. By 1944, she had been in two productions: a traveling production of “Maid in the Ozarks” and Broadway producer George Abbott’s show “Kiss and Tell.”

Giving to her country 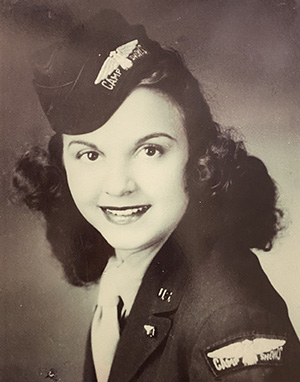 Carmelita and her father were very close, and he was the source of her interest in joining the USO. “My father was a great patriot and he instilled in us that you don’t take anything away from this country, you give. I think maybe Kennedy got his idea from my dad.” When she heard that “Kiss and Tell” would be going overseas as a USO show, she had found her chance to help. “I called George Abbott in New York and said ‘I want to be in that company!’”, and after an fortuitous recasting of the entire show, she was. “[Her father] just thought it was wonderful that I was doing something for the country.” She packed up and headed to New York with her mother for rehearsals at age 20.

After six performances around New York, her USO troupe was finally alerted in January 1945, put on a train and given passports that showed their destination as the Mediterranean Theater of Operations. It was no shock to Pope that she would be traveling the world performing; “I imagined all kinds of things. My father would imagine with me. He put all kinds of wonderful ideas in my head.” However, her arrival at the military barracks was quite a big one.

Pope had been living in a hotel while in New York, but once arriving at Newport News, her accommodations became military barracks and she was told to pick a cot. “We had a very tough little sergeant that was in charge of us and she said ‘Now we’re going to line up for the latrine’. She made us march! We’re actors, we didn’t know what we were doing!” The latrines and showers, Pope would soon find out, were all communal. “Oh my heavens, I’m never going to be able to do this!”

An American in Italy

After surviving some basic training, the “Kiss and Tell” troupe headed to Italy aboard the USS General Richardson and after a brief German submarine scare, they docked safely at the Bay of Naples. Landing in Italy was particularly exciting for Pope. “It was a thrill for me because I had heard so much about Italy. My grandmother had come to America to teach Italian, she was a professor at Loyola University for 25 years…It was wonderful and thrilling to be in the land of my ancestors.”

All of the troupe’s costumes and set pieces had accidentally been sent to the front lines without them, so after a couple of days with nothing to do but sightseeing, they decided to create their own set and finally put on a production. “The whole show took place…on the back porch of the Archer’s home, and all we needed, really, was a couch and a couple of chairs and we could do a show. So we decided we’d just go ahead.” The only issue was finding a pivotal pair of shorts for Pope’s character Corliss Archer, so a helpful Special Service Officer provided a pair of army-issue satin sport shorts. “We did the show and when I came out in those shorts…they laughed so hard they almost broke up the show. That was the beginning of our entertaining.”

Performing for the troops was incredibly fulfilling for Pope. “There isn’t an audience in the world that is as great as that audience. When we played the Navy, all of the sailors at the end of the show, at our curtain call, threw up their hats. It was just thrilling. They were so appreciative. When we arrived at the theater, there’d be a line up of soldiers around the block, some would come the night before and sleep in the street so that they could get into the show and get a good seat.”

Pope was in Naples for the end of the war. “I don’t think we had the jubilation there that they did in the United States. Because these soldiers and sailors, they knew that this wasn’t the end for them, the war was still going on in the Pacific and they could be transferred there at any moment. So it wasn’t an entirely happy day for everybody.”

The day after the German’s retreated, Pope flew to Milan to perform. When she arrived at her hotel and “opened the closet door and here are all the German uniforms, there was ammunition, a Luger, insignias and everything else.” She was very worried that the German who had left in such a hurry would be coming back to collect all his things, especially as the key had mysteriously disappeared with him. “I started pushing all the furniture in the room in front of the door in case he came back.”

Pope and her troupe played to an estimated 110,000 troops during their time in Italy, putting on two performances a day with Wednesdays off. While never on the front lines, the ravages of war were still very apparent in bombed out buildings, limited supplies and planes flying overhead at night. In between shows, Pope and her fellow female castmates would visit the hospitals to try lift the spirits of the wounded soldiers. After six months of shows, the troupe was sent home via Africa. 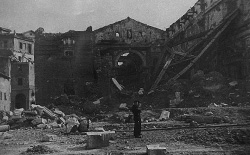 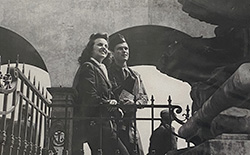 On the Ponte Vecchio with Budge Patti 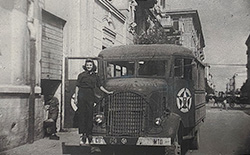 Pope next to the troupe’s transport bus

Pope went on to have a prolific career in theater, 1950s Chicago television and later as a commercial pitch woman in the 60s and 70s, most famously for PAM ads. It’s estimated that she appeared in 2,000 commercials. In 1986, she became the director of the Hollywood office of the American Humane Association and worked to improve the treatment of animals on movie sets.2

An Idahoan by late-in-life adoption, Carmelita Pope spent 20 years in Boise after a life of adventure, service and entertainment. She volunteered at the Warhawk Air Museum for many years, encouraging veterans to share their stories as part of the Veterans History Project. She recently passed away on April 3, 2019 and will be greatly missed.

This event is now over.

To celebrate Idaho Women’s Day and the extraordinary stories and lives of Carmelita Pope and the other women in our collection, the Warhawk Air Museum and the Nampa Train Depot will be hosting “Vintage & Victory Brunch & Fashion Show”. Join us for a delicious brunch, champagne and fashion show showcasing women’s attire between 1800 and modern day. The event will be a celebration of women’s roles throughout history and will feature the uniforms of Carmelita Pope and Kay Gott Chaffey (read her story), among many others.

I am so glad I had the honor of knowing this wonderful woman. She was beautiful in every respect.

I am glad I had the privilege of knowing her, She was a delightful person.

Where are you from?
Boise, Idaho
1
Paul Donovan

Carmelita was SUCH a darling woman!! We went to Washington together on one of the Honor Flights and we all enjoyed her and her stories SO MUCH!! She is so very missed! They sure broke the mold after they made her! God Bless you, Carmelita!!

Where are you from?
Nyssa, Oregon
1
P. Hayn

Great blog! Carmelita Pope is such a fascinating woman. Loved her in the Pam commercials.

Where are you from?
Nampa, Idaho
1

« The patriotism of beauty, grooming & fashion during WWII
Profiles in Courage Project »