A real life superhero: the story of Soapy Walborn

Soapy on a visit to the Warhawk Air Museum in 2013. Photo by Jim Raeder.

What makes a superhero?

Is it simply the status of possessing an extraordinary power or skill? Or is it something else — a combination of personality traits and decisions that can make a person more. Here at the Warhawk Air Museum, we believe it’s the later.

So, what does make a superhero? We’d posit that it’s courage, unending motivation and drive, intelligence, a strong sense of duty and loyalty, leadership, humility, hard work, selflessness, and, if necessary, the unhesitating willingness to risk one’s own safety for others.

While these traits certainly describe a number of fictional heroes and heroines to varying degrees, they, more importantly, describe many of our country’s veterans and active duty military personnel. Because, while a fictional hero can be an entertaining escape, it’s the real life superheroes — our veterans and military—that have a tangible impact on American’s quality of life and the liberties we enjoy daily.

While there are innumerable stories to be told of heroism during war or military efforts, one of particular importance at the museum is that of Col. Chester A. “Soapy” Walborn (USAF, Retired).

Controversy and Conflict: the Vietnam War

United States involvement in the Vietnam War began in 1954, though the conflict had been ongoing for decades. It first intensified during World War II, when leader Ho Chi Minh created the Viet Minh (League for the Independence of Vietnam) to fight off invading Japanese forces. Minh had previously founded the Indochinese Communist Party in 1930. Upon Japan’s withdrawal in 1945, French-educated Emperor Bao Dai was left in control. Ho took the opportunity to seize control of the city of Hanoi, establishing the Democratic Republic of Vietnam in the North of the country.

The fight was for a unified Vietnam. For the North, that was a Vietnam modeled after communist countries, while for the South, a Vietnam with Western cultural and economic ties. This divide became formally recognized in 1954 when a treaty signed at a Geneva conference divided the country along the 17th Parallel. Emperor Bao was overthrown by Ngo Dinh Diem in 1955.

Conflict intensified after that, as strongly anti-communist Diem and U.S. equipped and trained South Vietnamese forces arrested around 100,000 Viet Cong (Vietnamese Communists), a rather derisive name for Southern Vietnamese Viet Minh sympathizers. Many were tortured and killed, and by 1957 they started to fight back. In 1960, the National Liberation Front was formed by Diem’s opponents and was believed by the U.S. to be an extension of the Viet Minh. This prompted a conditions report in 1961 by President John F. Kennedy, who then increased U.S. aid, but avoided a large-scale intervention.

In 1963, both Kennedy and Diem were assassinated within three weeks of each other. The instability this caused in Vietnam prompted newly appointed President Lyndon Johnson to once again increase military and economic support. The Gulf of Tonkin Resolution was passed in 1964 giving Johnson war-making powers, which he used in March 1965 to send a much larger number of U.S. combat forces into Vietnam. Over 380,000 troops were mobilized by 1966—compared to just 23,000 two years earlier.1 It had escalated into a full-scale war for the U.S. and there was solid support amongst the American public. But anti-war sentiment was hovering in the periphery.

With a policy of attrition warfare pursued by United States General William Westmoreland (wearing down an enemy through continuous losses of personnel and material2), the body count steadily increased and Vietnamese refugees fled to “safe areas”. Neither side would surrender and the atrocities of war were changing sentiment back in the U.S. By November 1967, the number of U.S. casualties had reached over 15,000 (over 109,000 wounded).3 With horrific images playing constantly on televisions; drug-use, PTSD and mutinies increasing among soldiers; and protests both at home and in Vietnam, any illusion of strong support for the war was gone.

After historically large anti-war protests and controversial U.S. military offensives, the U.S. and North Vietnam concluded a peace agreement in 1973 (after several previous attempts), ending hostilities between them. The conflict between North and South Vietnam continued until, in 1975, the North finally succeeded in capturing Saigon.

It was against this contentious backdrop that Soapy Walborn earned his stripes (in this case, the Silver Star, nine Distinguished Flying Crosses, 27 Air Medals, two Purple Hearts, a Bronze Star, four Vietnamese Crosses of Gallantry with Palm and a Vietnamese Medal of Honor)4.

For a much more thorough history of the Vietnam War check out these articles:

Chester Walborn was born “in the hill country of Kentucky” on September 8, 1932, to a 16 year old Ora Meece Roy. He lived with his grandparents and with no brothers and sisters or anyone else to play with, Walborn was a hunter “from when I came out of the birth canal”, hunting birds and rabbits with a single shot rifle, starting at the age of five. However, life wasn’t ideal. Soapy, as his friends call him, spent grades 1-3 at a tiny school in Decatur, Kentucky, where on the first day of the 4th grade he witnessed his teacher being shot in the head by a man angry his kids were forced to go to school. That was the last day of 4th grade for Soapy. His grandmother took over with a math book, an English book, and ‘Cooning with ‘Cooners (about Raccoon hunting), which comprised his education for most of the year.

Soapy was adopted at age nine on March 4, 1942 by George S. Walborn, a technical sergeant (retired a Colonel) in the Army Air Corps, who had married his mother. It was from Col. Walborn that Soapy got “reprieved”. His family had been very poor, and he says that “was first night that I’d ever spent in a room that had water in it and heat. It was the first time that I’d ever lived a civilized day of my life.”

He convinced Col. George Walborn to let him finish the 4th grade (though he’d missed the first 6 months) by arguing: “I’m smart and I will work really hard and I can do it”, which seems to have become his life’s mantra. Soapy thrived. He “went to school all over creation” including Kentucky, Illinois, South Dakota, Wisconsin, Florida, Hawaii, Texas (University of Houston), Alabama (Auburn University), and Washington, D.C. (George Washington University), getting straight “A’s” throughout, including during his three master degrees.

The aerial feats of a real life superhero 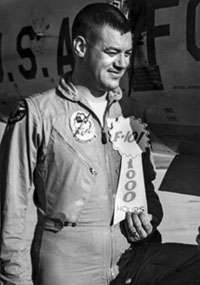 Soapy joined the Air Force on a fateful night in 1951. After his barbershop quartet performance at the “toughest, raunchiest night club in East St. Louis” for an Air Force Reserve Unit recently called to active duty, Soapy asked, “have you got room for a quartet?”

Soapy climbed the ranks quickly, receiving four promotions over six months. He then went through cadet training in 1953 and emerged a 2nd Lieutenant Radar Navigator. In 1958, he applied for pilot training and after five months graduated first in his class. His first assignment in a combat squadron was at Spangdahlem in Western Germany, where he flew B-26 Marauders, F-86 Sabres, F-89 Scorpions, F-102 Delta Daggers, F-106 Delta Darts, F-4 Phantoms, and F-101 Voodoos. But his reputation was really made from his skill and expertise flying the O-1 Bird Dog.

Soapy enlisted in a consecutive combat tour in order to avoid a position at the Pentagon, saying it was a position that “for promotion, probably would have been the best thing I could have done, but for my own personal happiness, I couldn’t imagine anything worse.” It was during this second tour that Soapy and his O-1 Bird Dog went above and beyond the call of duty. As his commanding general “Mo” Preston is quoted saying, “It looks like Major Walborn tried to win the Vietnam War all by himself.” 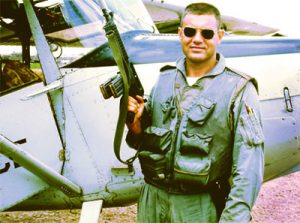 Soapy flew as a forward air controller in the area below the South Fork of the Mekong River, pinpointing enemy positions and orbiting overhead, often drawing heavy fire, until the artillery could move in. His O-1 flew low and slow, which allowed Soapy to observe the artillery dropped and adjust the fire coordinates appropriately.

Then came the Tet Offensive. Soapy was packed and ready to return home when “mud really hit the fan”. Just as one would expect of a real life superhero, Soapy stayed on to help, recounting, if “the war is going on and I am dumb enough to fight it, they are smart enough to extend my DEROs (Date Estimated Return from Overseas)”. During this time, Soapy was flying up to seven dangerous missions a day and was the only air power to repel the enemy at Con Tho, which was the southernmost base attacked during Tet.

Soapy was awarded nine Distinguished Flying Crosses for his missions in 1967 and 1968. Some of the highlights from these are:

While the war may have been controversial, Soapy’s skill, dedication and courage are nothing short of exemplary.

The luckiest man in the world

So, why give Soapy the moniker of real life superhero? Because Soapy had traits and displays of heroism in spades. From “hill country” one-room schoolhouses to three masters degrees, he was definitely intelligent. Soapy’s motivation, drive and hard work are also clear, from, at nine years old, promising his newly adoptive father that he “could do it”, to his 8,400 cumulative hours of flying time, and his willingness to take on jobs no one else wanted.

He even had some of the more lighthearted superhero traits: a “code name”; an extraordinary skill set in an innate, natural ability for flying (he won the World Recon Meet “Royal Flush” only five years after joining the Air Force, as well as winning the Air Force Interceptor Fighter Meet “William Tell” in 1961); incredible athletic ability (he played “professional” baseball and football, serving as safety, punter and kick returner on the Air Force championship team); and an almost fictional quota of good luck.

But what is most striking about Soapy is his humility, sense of duty, selflessness, and willingness to “make the sacrifice play, to lay down on a wire and let the other guy crawl over [him]” (Captain America5). The number of times, evidenced by his many medals, that Soapy used himself and his airplane as bait and diversion, leading the charge in the face of clear and present danger, is truly awe inspiring. And yet, he simply believes that “I was rewarded and blessed, far more than I ever deserved”.

He repeatedly affirms in his Veteran’s History Project interview that “I quite honestly consider myself the luckiest human being on the face of the Earth” and that there was “never really much that I’ve ever done with my life that did not involve duty that I was very proud of.” 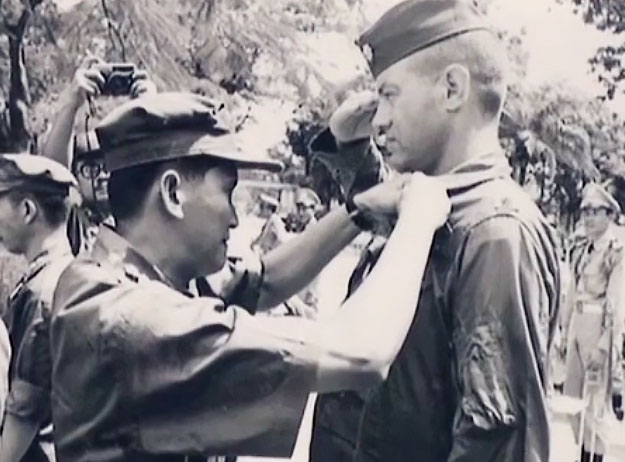 To honor and remember

Chester A. “Soapy” Walborn passed away on January 16, 2014 in Mountain Home, Idaho, and he’d like to be remembered by his preferred epitaph: “Soapy always did his best! God did the rest.”6

You can see many artifacts and memorabilia from his time in the Air Force at the Warhawk Air Museum.

If you or a loved one are a veteran, come tell us your story!

The Warhawk Air Museum is committed to collecting and preserving veteran histories through its participation in the Veterans History Project. These interviews are powerful in their ability to bridge generational gaps and protect memories and experiences that will otherwise be lost.

Each and every story deserves to be heard.

Contact Heather Moore, 208-465-6446 or email admin@warhawkairmuseum.org, to inquire about setting up an interview.

« Flygirls: Kay Chaffey and the first women in the Air Force to take flight
Pay tribute to fallen heroes this Memorial Day Weekend with “Murph” at the Warhawk »