Finding community and honoring greatness at the Kilroy Coffee Klatch 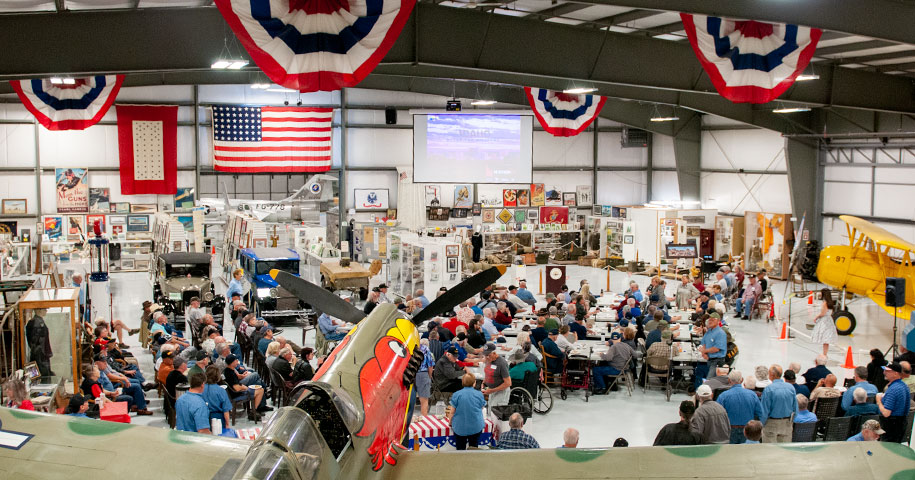 The Kilroy Coffee Klatch at the Warhawk Air Museum is a monthly get together held the first Tuesday of every month. It is an event that is free to any and all veterans and open to the general public (regular admission applies for non-veterans). Coffee and breakfast treats are served starting at 10am and a speaker is brought in each month to provide a 20 to 30 minute presentation on veterans, veterans issues or personal experiences in the military.

The founding of the Kilroy Coffee Klatch

When the museum opened its Nampa location in 2001, Sue Paul, museum co-founder, was approached by a group of 15 World War II veterans who asked if they could use the museum once a month to meet for coffee and talk. Paul responded enthusiastically with a “You bet! That’s what the museum is about. We don’t have any money for donuts, but we’ll provide the coffee.” Having supplied their own donuts, they met for the first time in the museum’s kitchen and, sipping coffee, they decided they needed a name. It was to be Kilroy and thus the Kilroy Coffee Klatch was founded. (The museum now provides the donuts.)

The event stayed small at first; “the first five years we had maybe up to 25 or 30 guys, all World War II at that time” says Paul. They would come to the museum, have coffee and just talk. Paul was always in attendance, “just to have a good time.” But through word of mouth (the main form of advertisement for the event throughout its lifetime) it just kept growing. Then, about 12 years ago, a veteran approached Sue with a new idea. “Someone came up to me at some point and said ‘Jeez, would you be interested in me talking? I’d like to share something about one of my experiences during WWII’ and I said sure, we’d love that.” That was the beginning of the event as it has become.

After that initial speaker Paul found that she had unlimited interesting stories that people could tell and so she created a schedule and brought them in. Each speaker gets 20 to 30 minutes to share their presentation. Topics range from personal stories to military affairs, but are always centered around veterans. It is sometimes challenging for the speakers to limit their pieces to 30 minutes, but Sue Paul is adamant. “I am very protective of our veterans that we have here. I don’t want them to think they are a contained audience.”

Recent speakers have included Brian Von Herbulis (Mission43), Jack Donohue (Music and Military Campaigns over the Past Century), La Var and the Kimberly Kofoed family (performing Christmas and holiday songs), and a recurring favorite Todd Carlson (Sentinel at the Tomb of the Unknown Soldier). Sue Paul says that she enjoys every one of the speakers she’s brought in. “Everyone who comes here, comes with passion. They are giving of themselves when they talk.”

The event now averages around 250 veterans each month, making it the largest monthly gathering of veterans in the state of Idaho. However, the demography has changed. What started as a group of WWII and a few Korean veterans has become mostly Vietnam veterans “as they began to fall in love with this museum and that we were preserving their history with such dignity and gratitude to them.” The event currently has around 95% Vietnam veterans, though everyone is highly encouraged to attend.

“It’s become such a beloved coffee event because we have so much fun. The whole purpose of the coffee is to have a very wonderful, light, enjoyable morning once a month, where people leave with a high spirit, a good feeling, and laughter in their soul” says Paul.

Not sure who Kilroy was? Maybe surprisingly, Kilroy does not, in fact, refer to our very own COL (Ret.) Pat Kilroy, but was rather a character that became part of the public consciousness during WWII. A bald(ing) man with a large nose peeking over a wall, Kilroy was a “viral meme” before there was even an internet. He was usually accompanied by the phrase “Kilroy was here”.

Kilroy was predated by a similar, English figure “Mr. Chad”, who was usually accompanied by the phrase “Wot? No sugar?” (or a similar complaint) to comment on shortages and rations during the war. It is assumed the American soldiers borrowed “Mr. Chad” to create Kilroy.

The phrase, however, is a bit of a mystery. While some consider Kilroy to be a mythical figure, there have been others who claim to be his namesake. One such claimant is the shipyard worker James J. Kilroy. J. J. Kilroy inspected work done on tanks and hulls of warships and claims to have used the phrase to verify that he was indeed inspecting the ships he was being accused of neglecting. He believes that the other shipyard workers carried the phrase over to Europe as they joined the war. Perhaps a grain of salt with this story, however, as it was given during a radio contest and Kilroy, as the winner, was given the grand prize of a full-size trolley street car.

Another namesake could be Sgt. Francis J. Kilroy, Jr. who wrote “Kilroy will be here next week” on a barracks bulletin board while ill with the flu.

There is a great deal of mythology behind and iterations of this character. He has popped up in a wide variety of countries such as Canada, Poland, Russia, Chile, and Africa. In a rather humorous story, it is claimed that a German Intelligence Officer captured some American equipment with the phrase on it, leading Adolf Hitler to believe that Kilroy was the code name of a “high-level Allied spy”1. And who’s to say, since, as the Polish poet Peter Viereck wrote in 1948, “God is like Kilroy. He, too, sees it all.”

It’s only fitting that Kilroy watches over this wonderful community of veterans meeting monthly at the Warhawk Air Museum.

The largest monthly gathering of Veterans in Idaho

If you ask a veteran attending the Kilroy Coffee Klatch what they like most about the event, they will almost unanimously agree that it’s the camaraderie and community.

When Sue Paul interviews veterans (often for the Veterans History Project), she asks them what the hardest part about leaving the military is. They often reply that it’s leaving their military family. “Its very, very lonely to leave the comfort of that, where anywhere you go, you’ve got someone on your back…and then all of a sudden you have nothing” says Paul. This void is what the Kilroy Coffee Klatch has attempted to fill. “These are all military men and women who have now found, again, a community that has its back” says Paul.

Jim Burton of Nampa, Idaho finds the Coffee Klatch a “good way to release your emotions. A lot of the veterans, they keep it in”. Burton was one of the first veterans to come to the museum when it first started, and as a regular attendee, almost never misses an event.

When asked what he likes most about the event, Bob Brobesser of Meridian, Idaho replies “I like the news, the information it puts out. To see what is here, to hear what is here, to hear what is going on, to hear what already went on.” Brobesser is a 5 year attendee. Next to him is his friend Harold Kwan, a two time attendee from Boise. Kwan says he “had heard about it and finally had the courage to come.” The two were in the Korean war at the same time and the event gave them a chance to connect and find community in their later years.

“A lot of these guys hook up with guys they haven’t seen in 40 years…find that they were in the same unit, or on the same base at the same time. It’s fun to see” says Frank Turner, a veteran and five year volunteer at the museum.

The Kilroy Coffee Klatch is not just for veterans, however. Spouses, family, and civilians are more than welcome. Helen Durham of Boise still attends even after the death of her husband, Bull, three years ago, who was a veteran from WWII. “It’s just like my family” Durham says. Her husband was one of the founding members who met in the kitchen and participated in other museum events such as the powerful “Bridging the Generations”, with Helen often in attendance.

“It’s the History” says Richard Dimmick, a veteran and seven year volunteer. “You read about the Battle of the Bulge, some of these guys were in it. Okinawa, they were there. They were on the landing.

It’s a totally different perspective”. “Certainly, you’re among greatness in this room” says Turner, “I love being around these guys and hearing their stories”.

Whether you are a veteran, a military family member, or a civilian, this community and event is for you. Find camaraderie, understanding, acceptance and history here, surrounded by generations of veterans who have made this country what it is. You can find the upcoming dates on our calendar. Come join us!

Sign up for the Warhawk Air Museum newsletter for monthly announcements on the Kilroy Coffee Klatch speaker. We hope to see you soon.