Every September just north of Reno, Nevada, the roar of plane engines can be heard for miles around during the National Championship Air Races. This one-of-a-kind event showcases an assortment of race planes and gives guests up close access to racing aircraft, their pilots and their pit crews.

The tradition began in Cleveland during the 1920s, 30s and 40s as the relatively new technology captured the attention of audiences from around the country. Aviation was still in its infancy and was dangerous – crashes were common, and fatalities sometimes occurred, but the danger played a large part in drawing crowds.

The most popular events were the air races, which typically featured planes flying five laps around a circuit at incredibly 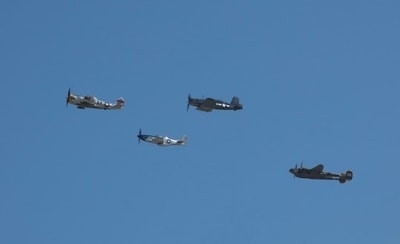 high speeds. Following a horrific crash into a house in 1949 which killed a pilot and a mother and child inside the house, cities around Cleveland Airport – near where the races were held – barred the races from being held in their airspace.

In 1964, William M. (Bill) Stead resurrected the National Air Race following the success of a 1962 race he held in Nevada. The first event was held at Sky Ranch Airport in Sandy Valley, Nevada, which provided adequate room for safe, high-performance flight. He worked diligently with local businesses, community members and the Federal Aviation Administration (FAA) to lift the ban surrounding these events.

Some 80,000-odd people attended the first show, and the event has been a hit ever since. After the 1965 event, the races moved to the U.S. Air Force’s Stead Field in Reno, Nevada after it closed. The new location provided the Reno Air Races with useful hangars, ramps and hard surface runways. 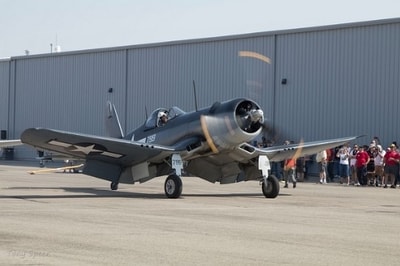 In the last 55 years, the event has only been canceled once. Following the September 2001 terrorist attacks in New York, Washington D.C. and Pennsylvania, all aircraft in the United States were grounded.

Today, the races are known as the National Championship Air Races. It is the last event of its kind, carrying on the tradition that began in Cleveland almost 100 years ago. In the last 10 years alone, the event has attracted more than 1 million observers and generated more than $600 million for local businesses.

The races are now programmed by the Reno Air Racing Association, a 501(c)3 not-for-profit organization with a small full-time staff and hundreds of volunteers who work diligently to preserve the event. Some 2,500 volunteers serve in various capacities each year.

In Eastern Idaho, prior to the 2017 races, pilot Steve Hinton Jr. shattered the previous world air speed record for propeller driven, piston powered aircraft set in 2012 by over 200 mph. After four consecutive passes in the highly-modified P-51 Mustang “Voodoo,” Hinton achieved an average speed of 531.53 mph. The previous record was set by Will Whiteside in the Yak-3 “Steadfast” at just 318 mph. 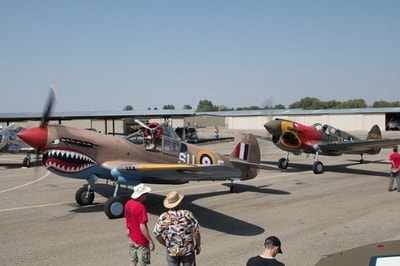 Screamin’ Sasquatch” Jet Waco. There will also be a demonstration from the F-16 Fighting Falcon and an F-35 leading the Heritage Flight.

Families are welcome to gather and look to the skies for an unforgettable experience. The event showcases six different classes of race planes in addition to:

Warhawk Air Museum is proud to host our 16th annual Warbird Roundup on August 25 and 26 in Nampa, Idaho. This year, our show will feature over 22 rare World War II aircraft, the return of the fascinating “Dottie Mae” and the world’s fastest speed record holder for piston powered aircraft, the P-51 Mustang “Voodoo.”

Join the museum and our special guest speaker, Steve Hinton, for delicious food, drink and amazing aircraft. We hope to see you there! For more information and tickets to our special event, visit us online or call 208-465-6446 today!