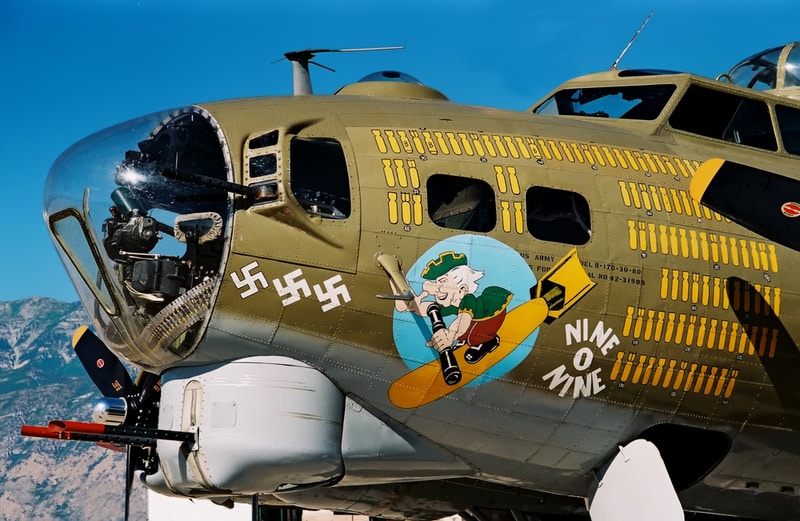 Since World War II, pilots have decked out the noses of their aircraft in creative ways, allowing people to connect not only with the machine, but the operators as well. This history of aircraft nose art has developed in fascinating ways from the 1940s to present day.

Pin-up art is virtually synonymous with aircraft nose art. Since the practice began in the 1940s, countless immodest depictions of women have appeared on hundreds, if not thousands of planes. Pin-up art remains popular today as many artists and studios continue to reproduce some classic WWII designs.1

Patriotic Messages and Signs of Protest

During WWII, patriotic messages were often emblazoned on the noses of aircraft as morale boosters to rally American soldiers in their fight against the enemy. As the U.S. began battling faceless dangers like communism, signs of protest replaced upbeat patriotic art, and death became an omnipresent theme.2

Cartoon characters were also popular images for nose art and inspired airplane names, such as Super Wabbit, Ruptured Duck and Thumper. The characters reminded soldiers of home and gave them a distraction from the fight at hand. Even the Walt Disney Company created insignias for military planes. By the end of WWII, Disney’s five-man staff had completed over 1,200 insignias.

Movie starlets like Rita Hayworth were commonly featured on WWII aircraft and acted as muses for much of the era’s popular art. During the Vietnam War, however, nose art dramatically shifted to focus on rock music in part because of society’s shift in attitude.

Animals, both cartoon and realistic, appeared in nose art regularly throughout the decades. The animals were a symbol of something the pilots had control over and represented different myths or legends that told stories of victory. One study found an estimated 15 percent of nose art depicted four-legged animals and 30 percent related to myths or legends.3

Get an Up-Close Look at History

Observe historical aircraft nose art in-person at the Warhawk Air Museum in Nampa, Idaho. Since 1989, we have worked diligently to preserve history and educate future generations about American veterans and their contributions to our country. We hope you will come visit us and see for yourself! Contact us for more information or to schedule a tour.