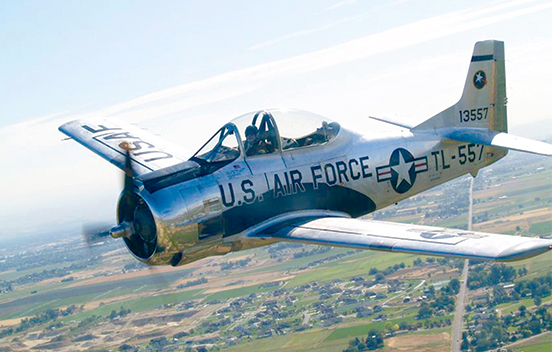 Past Visitor
Designed to replace the World War II era T-6 trainer, the T-28 Trojan possessed higher performance than its forerunner and was easier to maintain. Also, the Trojan’s tricycle landing gear taught pilots to take off and land in the same fashion as the high-performance aircraft they were training to fly.

The first T-28 flew in September 1949, and the T-28A Trojan entered production in 1950. An 800-hp engine powered the U.S. Air Force version (T-28A Trojan) while the later U.S. Navy versions (T-28B and C) were powered by a 1,425-hp engine. When production ended, North American Aviation had built a total of 1,948 T-28s. Beginning in 1962 the USAF modified more than 200 T-28As as tactical fighter-bombers for counterinsurgency warfare. Equipped with 1,425-hp engines, these airplanes (redesignated the T-28D “Nomad”) were effective weapons for close air support against enemy troops in Southeast Asia.
The USAF replaced the T-28 as a primary trainer in the mid-1950s with the piston-engined Beech T-34 Mentor and jet-powered Cessna T-37. Trojans, however, continued to be flown by the Air National Guard until the late 1950s, and by the U.S. Navy into the 1980s.
The museum’s T-28A Trojan was sold to the French Air Force in the 1960s. Sude Aviation in France modified the airplane to French Air Force requirements: 1300 HP engine, radio and armament requirements of French Air Force. Then it was used in Morocco, North Africa until the early 1970s. The aircraft was sold to Euro World and flown to the United States from Morocco to New Jersey, via Lajes Azores, St. Johns New Foundland. Bob Nightengale purchased the airplane in 1985 and remains it’s current owner.